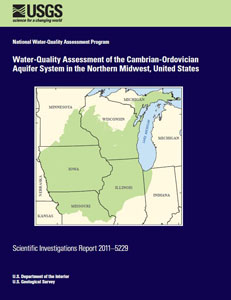 This report provides a regional assessment of groundwater quality of the Cambrian-Ordovician aquifer system, based primarily on raw water samples collected by the NAWQA Program during 1995 through 2007. The NAWQA Program has published findings in local study-unit reports encompassing parts of the Cambrian-Ordovician aquifer system. Data collected from the aquifer system were used in national synthesis reports on selected topics such as specific water-quality constituent classes, well type, or aquifer material; however, a synthesis of groundwater quality at the principal aquifer scale has not been completed and is therefore the major purpose of this report.

Water samples collected by the NAWQA Program were analyzed for various classes of characteristics including physical properties, major ions, trace elements, nutrients and dissolved organic carbon, radionuclides (tritium, radon, and radium), pesticides, and volatile organic compounds. Subsequent sections of this report provide discussions on these classes of characteristics. The assessment objectives of this report are to (1) summarize constituent concentrations and compare them to human-health benchmarks and non-health guidelines; (2) determine the geographic distribution of constituent concentrations and relate them to various factors such as confining conditions, well type, land use, and groundwater age; and (3) evaluate near-decadal-scale changes in nitrate concentrations and pesticide detections. The most recent sample collected from each well by the NAWQA Program was used for most analyses. Near-decadal-scale changes in nitrate concentrations and pesticide detections were evaluated for selected well networks by using the most recent sample from each well and comparing it to the results from a sample collected 7 or 11 years earlier.

Because some of the NAWQA well networks provide a limited areal coverage of the aquifer system, data for raw water samples from other USGS sources and state agencies were included to expand the data coverage into areas between the NAWQA well networks and into northeastern Missouri. Many of the maps in this report that show concentrations of selected constituents include data from other sources to expand on the geographic area covered by the NAWQA data.

WATER FLOW MODEL LAKE MICHIGAN BASIN, MI
Product: 209158
Version Date: 2009
Media: Paper
Format: Bound
+ More Details
For all orders a $5.00 USD handling charge is applied. To protect your order during transit, products of different publication types and sizes may be shipped in separate packages.
Current in-house processing time: Shipping times are estimations after the package has been shipped from the USGS warehouse. Orders may take up to 10 business days to be shipped.
We Accept