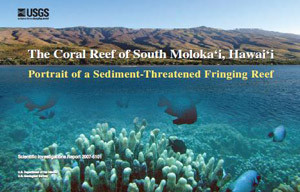 Description
Hawaiian Reefs, like other reefs worldwide, harbor an incredible diversity of plant and animal life and that richness is reflected in the cultural traditions of native peoples and in prosperity from tourism. However, coral reefs are in decline worldwide and Hawaii and Molokai are no exception. An abundance of land-derived silt has washed from Molokai's slopes, and threatens the health of the island's reef by blocking light and choking the reef inhabitants. Conditions on Hawaii's reefs vary from island to island and location to location and the causes of degradation are both natural and human induced. The importance of identifying and monitoring the effects of land based pollution has become crucial within the United States. Starting in 1999, the USGS, along with university and agency partners, initiated a study to map the reef off south Molokai and describe the coral, analyze the sediment, and measure the processes that suspend and transport sediment on the reef. The fringing reef, like the island itself, is the product of many cycles of growth and destruction. It is a combination of modern growth over a volcanic surface shaped by ancestral patterns of sea-level change and reef accretion. Despite the similarity in origin and physical processes that Molokai shares with the other Hawaiian Islands, the island is unique in many ways. Its marked east-west orientation and its relatively storm and wave protected south shore are two important factors that have contributed to the development of a spectacular coral reef that is perhaps the most extensive and continuous fringing reef in the Hawaiian chain. But today the Molokai reef is at a crossroad # the evidence of damage from heavy land use is clear, and yet procedures for its protection through improved land-use practices are already underway. It is hoped this publication will be of value to all coastal people living harmoniously with neighboring coral reefs. Some of the causes of reef degradation are global, but many remain local. It is largely through local decisions and local actions that protection of coral reefs can be assured for future generations. This Scientific Investigations report contains 180 pages of information in color.
Survey Date
2008
Print Date
2008
Height In Inches
11.000
Width In Inches
0.500
Length In Inches
17.500
Two Sided
Yes
Pieces
1
Languages
English