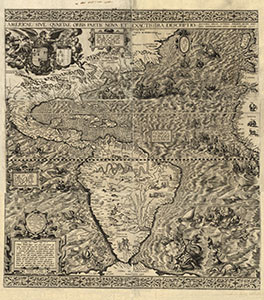 Description
The map provides a richly illustrated view of an America filled with images and names that had been popularized in Europe following Columbus's 1492 voyage of discovery. Images of parrots, monkeys, mermaids, fearsome sea creatures, cannibals, Patagonian giants, and an erupting volcano in central Mexico complement the numerous settlements, rivers, mountains, and capes named. The Gutiérrez map contains one of the earliest references to California showing " C. California," located on the southern tip of Baja California. The map correctly recognizes the presence of the Amazon River system, other rivers of South America, Lake Titicaca, the location of Potosí and Mexico City, Florida and the greater southeastern part of the United States, and myriad coastal features of South, Central, North, and Caribbean America. It is the largest printed Spanish map of America to appear before the late eighteenth century.
Survey Date
1562
Print Date
2004
Height In Inches
43.000
Length In Inches
38.500
Two Sided
No
Pieces
1
Languages
Spanish