The Bailey, Colo. 1:100,000-scale quadrangle lies within two physiographic and geologic provinces in central Colorado: 1) the Front Range and 2) South Park. Most of the Front Range is composed of Proterozoic rocks ranging in age from 1,790 Ma to 1,074 Ma. Along the eastern flanks and within the Denver Basin, sedimentary rocks ranging from Pennsylvanian to Cretaceous are deformed and steeply tilted to the east. Upper Cretaceous through Paleocene rocks were deposited in the foreland (that is, the Front Range eastern flank) and hinterland (that is, South Park) of this thrust and reverse fault system developed during the Late Cretaceous to Paleocene Laramide orogeny. Within South Park, rocks range in age from Pennsylvanian to Miocene with Quaternary deposits indicating tectonic subsidence of the basin. These rocks record five major geologic episodes: 1) the Paleozoic Anasazi uplift that formed the Ancestral Rockies, 2) the Late Cretaceous to Paleocene Laramide orogeny, 3) widespread Eocene to Oligocene volcanism, 4) Oligocene–Quaternary tectonics, and 5) Quaternary glacial episodes. 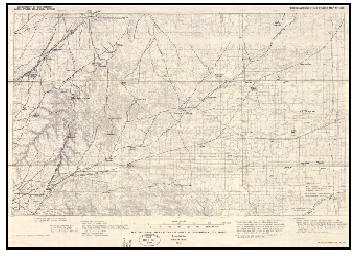 GEOLOGIC SAND CREEK PASS, LARIMER, CO
Product: 244252
Version Date: 2010
Media: Paper
Format: Flat
+ More Details
For all orders a $5.00 USD handling charge is applied. To protect your order during transit, products of different publication types and sizes may be shipped in separate packages.
Current in-house processing time: Shipping times are estimations after the package has been shipped from the USGS warehouse. Orders may take up to 10 business days to be shipped.
We Accept